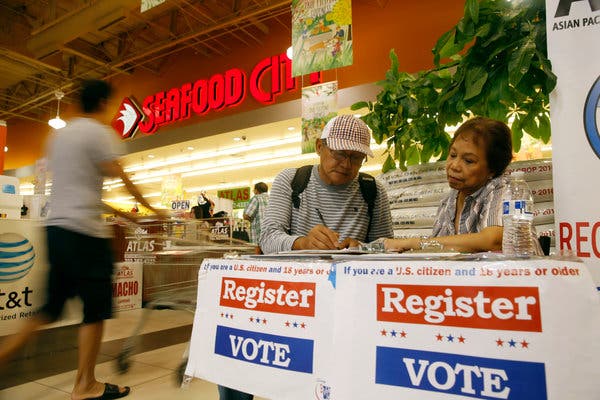 Virginia is the clearest example of a state that has moved to the left politically. After decades as a Republican stronghold, it has voted Democratic in every top-tier statewide race — president, senator, governor — since 2010.

But as well-known as Virginia’s transformation may be, one major cause of it hasn’t received much attention: Asian-American voters. Their numbers have boomed in recent years. Their voter turnout has also risen. And the radicalization of the Republican Party, especially on cultural and racial issues, has sent Asian-Americans voters fleeing to the Democrats.

In a new piece for Washington Monthly, Saahil Desai suggests that Virginia can serve as a model for Democrats nationwide. “Democrats’ failure to mobilize” Asian-Americans, Desai writes, “has been a major missed opportunity.” Outside of Virginia, many other swing states and House districts — in California, Nevada, Arizona, North Carolina, Georgia, Florida and elsewhere — have meaningful Asian-American populations.

In the last midterm election, in 2014, the nationwide turnout for Asian-American citizens was dreadful — just 27 percent, according to the census. That’s far below the rates for whites and blacks and virtually identical to the Latino rate. In Virginia, however, turnout has been significantly higher — the highest Asian-American turnout in the nation, Desai writes — thanks to a deliberate strategy that has included:

· Publishing sample ballots and voting guides in other languages and distributing them before elections.

· Doing some of the basic political outreach that for too long has skipped over Asian-Americans. (Last year, for example, DAAV threw a celebration of Diwali, the Hindu festival of lights, for now-Gov. Ralph Northam to lead.)

· Talking about the many issues — like immigration policy, education funding and social services — in which the opinions of most Asian-Americans align with Democratic positions.

For more on this topic, you can read: my recent columns on the problemof low progressive turnout; Karthick Ramakrishnan’s American Prospect piece, “How Asian Americans Became Democrats”; and Pew’s extensive 2013 report, which breaks down the attitudes of different groups of Asian-Americans.

Pew’s report helps highlight the size of the opportunity for Democrats. The six biggest Asian-American groups — which, in descending order, are Chinese-, Filipino-, Indian-, Vietnamese-, Korean- and Japanese-Americans — have varying opinions on nearly every major political issue (as these charts show). Yet not one of these subgroups leans Republican.

And remember that the Pew report was done in 2013. Since then, the Republican Party has become even more radical and racialized, and, as Desai writes, Asian-Americans have become even more Democratic. But he also warns that Democrats shouldn’t take their loyalty for granted. On some issues — like affirmative action, which is in the news again today — Republicans have an opening.